Pablo Reinoso was born in Buenos Aires (Argentina) on March 8th 1955, and has lived and worked in Paris since 1978. Originally a sculptor but essentially an artist, he has practiced art in different ways since an early age. He created his first sculpture at thirteen and his first bench-sculpture at fifteen, but at six he had already made chairs and bookcases, and had invented carts that tore down the slopes of France Square in Buenos Aires.

He was born to a French mother in Argentina and settled in Paris in 1978. His love for his French grandfather, a cultured man, an art lover, and a handyman, aroused his curiosity about human inventions of all kinds and enticed him to learn how to use carpenter tools. From his sculpture teacher he got his taste and respect for noble materials and relentless work. He won a scholarship to learn marble techniques in Carrara, and was thus spared the violence of the Argentine dictatorship. He decided to settle in France.

Pablo Reinoso works in series that he traverses, grinds up, and rummages through so as to explore different worlds and materials. As it might potentially happen with any series, his are always open-ended, conveying the permanent work in progress that constitutes his way of thinking. After having extracted from noble materials series as coherent and solid as les articulations (1970-1980) [Articulations (1970-1980)], les paysages d’eau (1981-1986) [Landscapes of Water (1981-1986)], or la découverte d’Amérique (1986-1989) [The Discovery of America (1986-1989)], Reinoso cast off these materials and ventured into other paths. He started a series of breathing works (1995-2002) made of fabric and air. Appropriating the architectural space located between the installation and minimalism, he plays with the precariousness of our existence to evoke the body, the insistence of the drive, life and death.

The culminating point of this period is a very striking installation at a chapel that acts as an exhibit room for the Museo de Arte Moderno de Bahia (Bahia Modern Art Museum) in Brazil (1996). Two hundred breathers (respirantes) flood the sound atmosphere and hit the eye with the colors of orixás, African deities that were part of the slaves’ religious syncretism. Through the mixture of cultures — the virtues of crossroads, unexpected paths bridging genres — history confronts us with time, and breathing refers insistently to human existence.

The installation Ashes to Ashes (2002, Casa de Américas, Madrid) marks a turning point in Pablo Reinoso’s journey; it bursts the work-object, referring us to earlier, precursory projects in his oeuvre. In the 1980s he had already created two defining installations, La mer de Charbon (Coal Sea) and Une proue pour la démocratie (A Prow Toward Democracy), where both the relationship with architectural and urban spaces and a political component were present. In Ashes to Ashes Pablo Reinoso continues his reflection on time, the fragility of certainty, and the fleetingness of the established order, albeit in a more mature way. He works with wood boards that he twists and breaks to make them free themselves from their function. In this way, he introduces us to the question of loss and thus points at something of the impossible, intrinsic adaptation of human beings to their world.

Continuing with this approach but having undergone, in the meantime, an intense experience in the corporate world as artistic director and designer, in 2004 he tackled a series where he brought to the fore an icon of industrial design – the Thonet chair. He places this functional and paradigmatic object at the center of the work while taking away its function, which provided the Thonet chair with a goal and a raison d’être. He creates complex compositions that, by way of humor and derision, face us with the lack, the essential powerlessness of human beings. Based on these sculptures he produced videos where Blanca Li, a dancer in the manner of Buster Keaton, uses comedy to lead us from impotence to the impossible, finding an original way of dealing with it.

Subsequently, Pablo Reinoso took public benches of anonymous design as a starting point for his reflection. These benches cross cultures and have something of the out-of-time and out-of-date about them. Named Spaghetti (à partir de 2006) [Spaghetti (since 2006)], they start proliferating and finding their place in the most diverse spaces. Once again the artist is exploring the object-seat. Yet this time it is no longer the object but matter that is freed of its function to resume its path of wood, tree, vegetable. Reinoso stages benches that, having fulfilled their role as furniture, become once again branches that can grow and climb. They are no longer at the service of a function but retrieve their life and their condition. We might say that the desire of wood boards is revealed; that they indulge themselves and have fun while doing what is expected of them – being a bench. Thus they may at last express themselves freely by embracing architecture, roaming through places, exploring gaps, and giving free rein to their whims.

Finally, in his last series, les Scribbling Benches (à partir de 2009) [The Scribbling Benches (since 2009)], rather than an anonymous bench or an iconic chair, Pablo Reinoso uses a material — a steel beam — as his starting point. It is the unexpectedness of heaviness, destined to structure architecture, that is twisted like a string to create a bench and draw light, transparent, contemplative spaces.

Having studied architecture but being multifaceted, curious, and often self-taught, Pablo Reinoso has always straddled disciplines (sculpture, photography, architecture, design). He views these diverse fields as many different ways of reading the world and conversing with it; of creating and tackling challenges. A constant feature in his work is his penchant for endlessly questioning, subverting, using materials or objects against their grain, bringing opposites together, and playing with the limits of impossibility. Yet he always takes unforeseen, disconcerting paths with a hint of humor and derision, that is, with much seriousness and conviction. 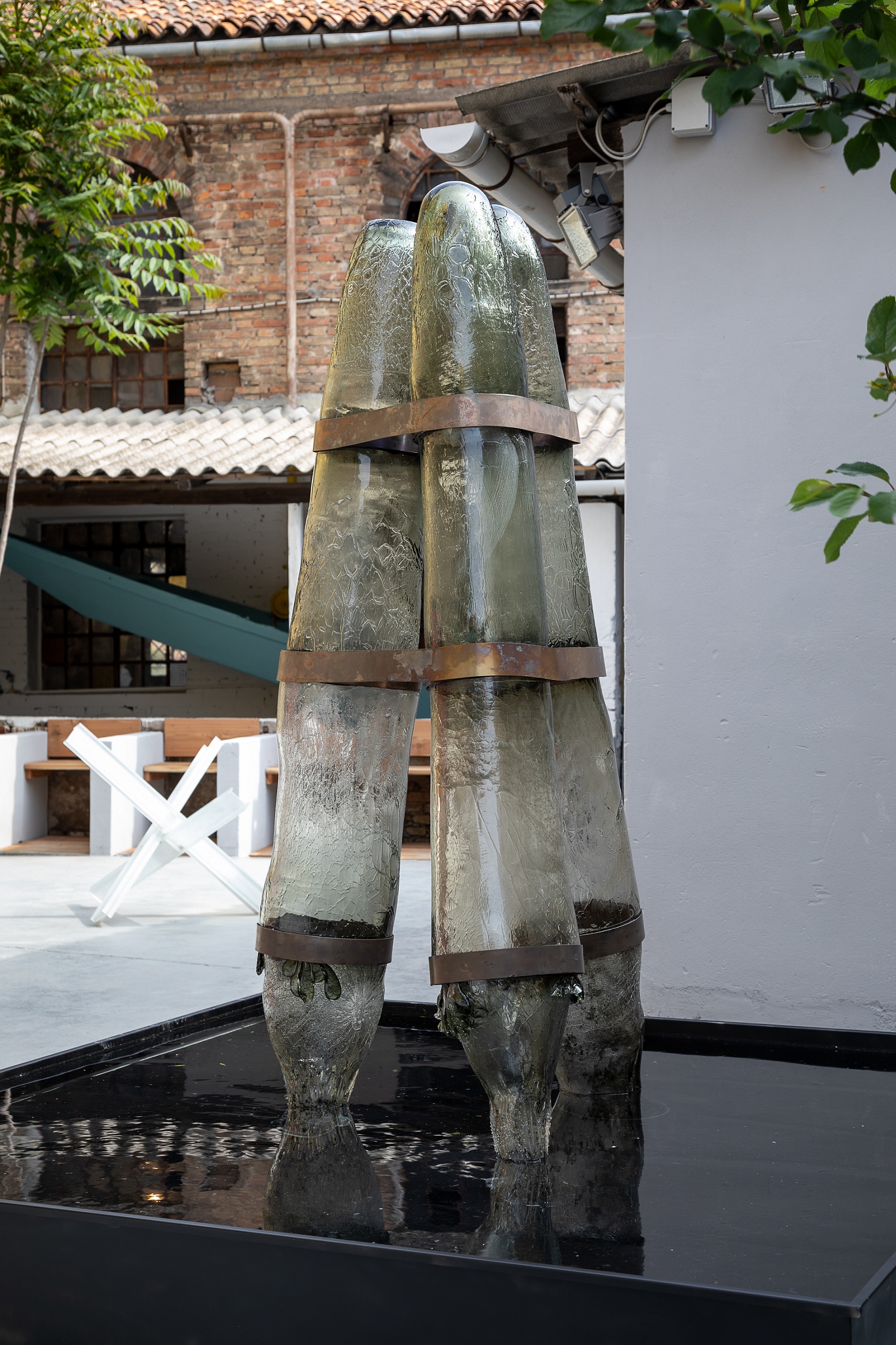 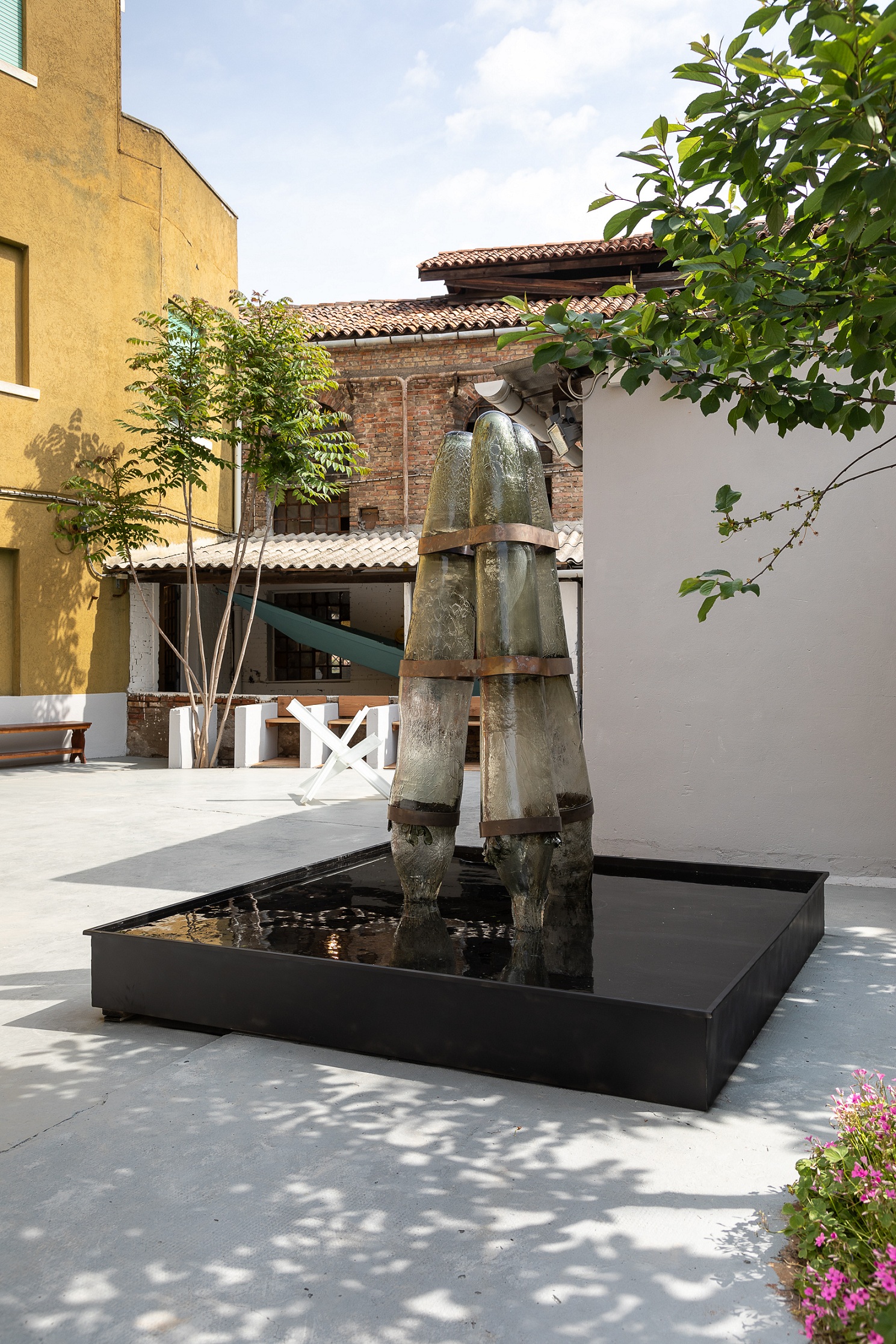